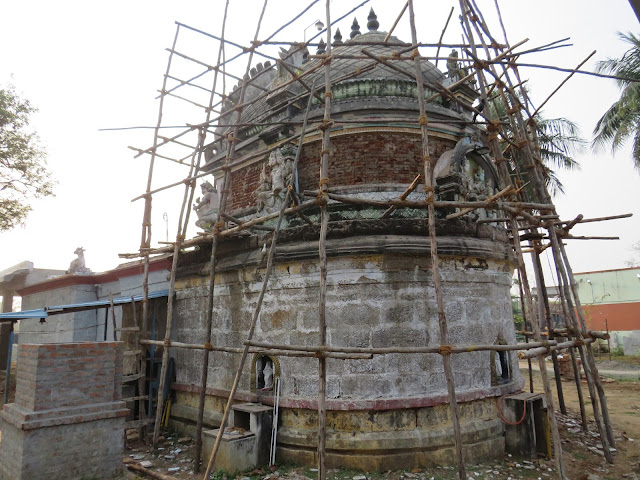 It is an unknown temple in a lesser-known hamlet called Kayarambedu near Guduvanchery in Tamil Nadu. Once a beautiful Gajaprshtha Vimana shrine, it is currently under renovation. Known as Vaakeeswarar Temple, it is said to have been built during Rajaraja Chola I's time. The inscriptions are white-washed and not readable. I could not access the reference of inscriptions of the site from any of the records. It is a small temple with an east-facing sanctum that enshrines Shiva Linga. The Goddess Karpagambal is also enshrined in a shrine that faces the same direction. Ganesha, Dakshinamurti, Vishnu, Brahma and Durga are found as the Pancha Koshta Devas. The Mukha mandapa must have been built around 200-300 years ago. The stucco image of a local saint named Manicka Naicker is placed here. The sub-shrines in the prakara are built in the recent past. More structures are getting added as part of the renovation that is happening currently. A big tank with a mandapa in the middle (called Nee
Post a Comment
Read more 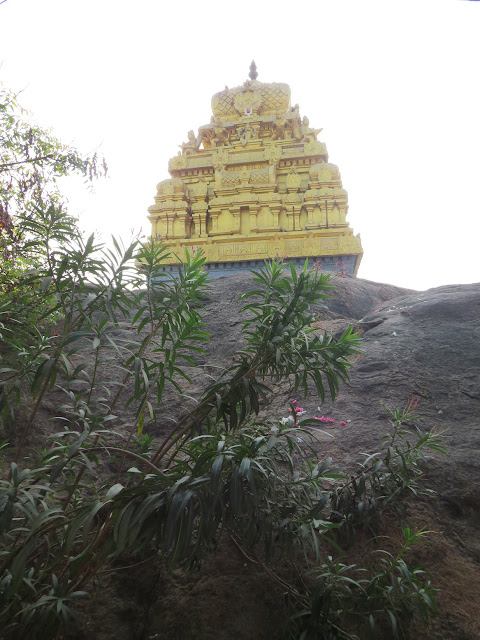 Singaperumal Koil  is a small town located between Chennai and Chenglepet. "Singa Perumal Koil" means "the temple of the Lion God" in Tamil. As the famed ancient temple of Narasimha is situated here, the village was named after the temple. It is pretty impossible to think of anyone from Chennai or Chenglepet not to have visited this popular Vaishnavite site. However, I always wonder how many of them realize that it is a Pallava-era cave temple . And, do they notice all the unusual features of the site? Do they get a holistic view? All these questions that I kept asking myself triggered me to revisit the site and write a very detailed article.  (Note: I wrote an article on this temple around ten years ago in my blog. I am covering the site again, intending to provide more detailed coverage.) Pranavakoti Vimana Introduction Singaperumal Koil  is situated at a distance of  52 km from Chennai, 22 km from Tambaram and 14 km from Chenglepet. Google Map location (coordinat
Post a Comment
Location: Singaperumal Koil, Tamil Nadu 603209, India
Read more 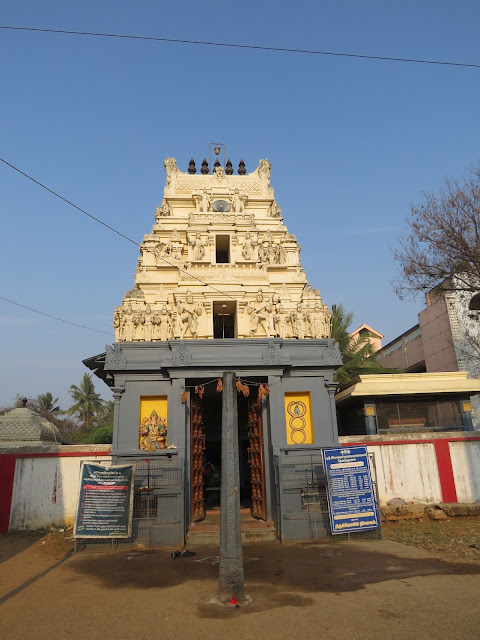 Besides the famous Madampakkam located near Selaiyur, another lesser-known village known in the same name is situated near Guduvancheri, to the south of Chennai. A small temple of Lakshmi Narayana is the only attraction of this place. Seated with his left leg bent at knee and right leg placed in front, the beautiful Narayana encircles Lakshmi with his left arm. Sitting on the left thigh of her husband, the Goddess holds a lotus in her right arm and gracefully hangs her left arm down. Together, they are called Lakshmi Narayana. It is rare to find Vishnu in this posture as the presiding deity in the Tondai region. The presiding deity and the base of the sanctum are probably 3 or 4 centuries old. The superstructure of Vimana, the three-tiered Raja gopura at the entrance and the sub-shrines are constructed in 1995 CE. An ancient lamp post (deepastambha) is located outside, and it faces the temple. Ardha mandapa has the metal icons of Vishnu and his two consorts, Sri Devi and Bhoo Devi. On
Post a Comment
Location: Guduvanchery, Tamil Nadu, India
Read more 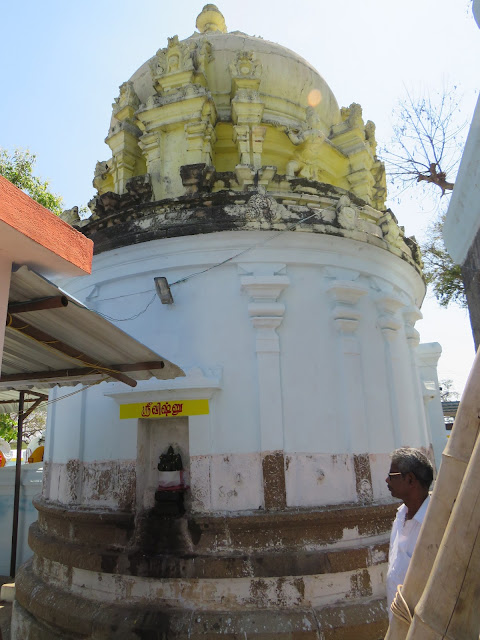 Originally Ooraththur, now diluted as Orathur , is a village near Padappai . It has a beautiful Chola-era Gajaprshtha temple named Agasteeswara . This article is written with the intention of promoting this unknown ancient temple. The east-facing temple was built probably during the later Chola period. Later, it was renovated and extended during the Vijayanagara rule. The inscription of Achyuta Deva Raya dated 1529 CE (A.R.E. 256 of 1910), which records a gift of a hamlet to the temple, mentions that Ooraththur was part of Sengattu kottam alias Irandayira veliparru in Jayankonda Chola mandalam. The deity is referred to as Tiruvagatteeswaramudaiya Tambiran. The current structure of the temple with all its sub-shrines and mandapas, belong to the early 19th century CE. As per a Telugu inscription dated 1813 CE found on a slab (A.R.E. 257 of 1910), Avanigaddala Pattabhiramudu , a wealthy person, rebuilt and expanded the temple. The stone images were also made by him.  The presiding deity,
1 comment
Location: Padappai, Tamil Nadu, India
Read more 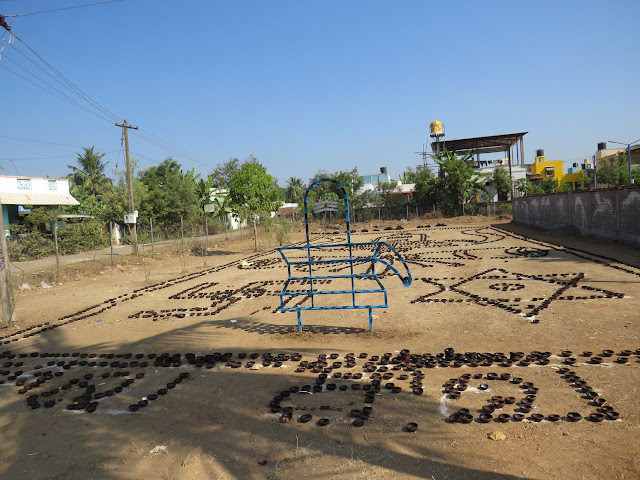 This village named Karasangal near Padappai is quiet throughout the year except during Maha Shivaratri. Shivaratri is celebrated in a grand manner in the Malleeswarar temple in this village. 10,008 lamps would be lit as part of the celebration. To view this rare event, thousands of people from the neighborhood gather at the village during this festival time. A villager discovered an ancient image of Shiva Linga in his field, and he kept it in his home for many years. Ultimately a Vaishnavite priest built a small temple for Shiva Linga and named him Malleeswarar in the middle of the 19th century CE. In subsequent years, more shrines were added to the temple. It is a small temple, which is hardly visited by devotees. Shivaratri is an exception.  It has two entrances, one in the east and another in the south, with the southern entrance being the main. The east-facing main shrine enshrines Malleeswarar, a small Shiva Linga. Maragadambal, the Goddess is found in a south-facing shrine. There
Post a Comment
Location: Karasangal, Tamil Nadu 602301, India
Read more 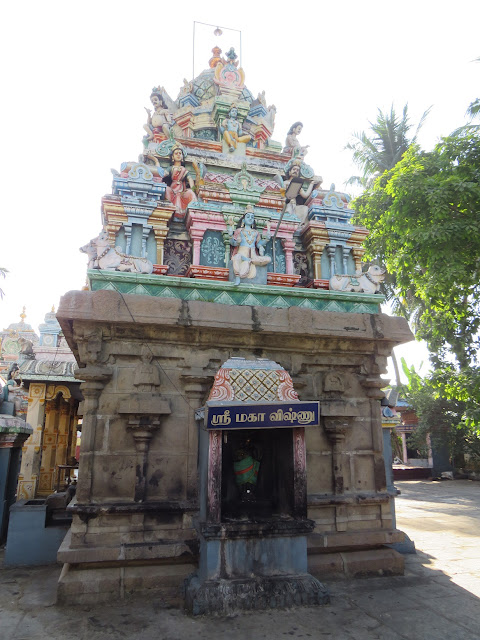 Padappai is a well-known and fast-developing town near Chennai. People from Chennai and its southern suburb localities know the town very well. However, not many of them would have heard about the Chola-era beautiful temple of Tiruvaleeswara, located in Athancheri, a hamlet located at about one km from Padappai. I agree it is contented to find the temple maintained well and all festivals and rituals conducted regularly. However, it is sad that the villagers, while renovating the temple, did not care about the inscriptions or other historical records.  Garbha griha, Ardha mandapa and the granite base of the Vimana are the only original structures that still remain. The super-structure of Vimana is renovated. We can assume that the original design was followed in the rebuilt structure. There are traces of inscriptions here and there, but none of them is in a readable form. I could not find details about the inscriptions in any published work. I spoke to a few people from the village, but
Post a Comment
Location: Padappai, Tamil Nadu, India
Read more
More posts